Hole 16BSDH033, a south-oriented hole drilled at -70 degrees, encountered 35.9 gpt Au over 4 meters including a narrower high-grade interval of 138.4 gpt Au over 1 meter at a depth of approximately 20 meters below and east of the bottom of the Gold Spec high-grade shoot (please refer to Figure 1 below and the nearby table of significant drill results). Repeat assays returned 41.7 gpt Au and 161.5 gpt Au from the longer and shorter intervals, respectively. True width of the vein is estimated at approximately 30-35% of the reported drill intercept length.

The high-grade intercept in 16BSDH033 is similar to one in historic hole BSD0002, situated 45 meters above and west, that graded 254 gpt Au over 0.7 meters. The robust intercept in 16BSDH033 suggests that a possible explanation for the lack of a significant gold intercept in nearby hole 16BSDH028 (please see the Company's press release dated November 29, 2016) might be that the latter hole simply failed to pierce the targeted vein.

Hole 16BSDH038, a south-oriented hole drilled at -72 degrees, encountered 5.2 gpt Au and 1.96% Sb over 12 meters at a depth of approximately 20 meters below hole 16BSDH034 (please see the Company's press release dated November 29, 2016) and fully 70 meters below the known deposit. A high-grade antimony intercept of 18.12% Sb over 1 meter is included within this longer interval. Given that holes immediately above 16BSDH038 do not contain such high-grade antimony, Novo thinks that a new Au-Sb zone is developing at depth, potentially similar to that at the Blue Spec deposit approximately 1.4 km east. Further drilling is required to verify this possibility.

"We are very pleased to see the Gold Spec high-grade shoot continue to expand," commented Dr. Quinton Hennigh, President, CEO and a director of Novo Resources Corp. "The very high grade antimony present in hole 16BSDH038 appears to be similar to that found in the high-grade Blue Spec shoot and may be telling us a new system is coming together at depth. We look forward to drill testing this possibility in 2017."

Five wildcat holes targeted an area called Pros Spec approximately 11 kilometers east of the Blue Spec mine. The easternmost of these holes, 16PSDH001, a north-oriented hole drilled at -65 degrees, encountered 1.0 gpt Au over 54 meters (hole ended in mineralization) including a higher grade interval of 3.5 gpt Au over 6 meters.

The other four holes drilled at Pros Spec, all situated west of 16PSDH001, encountered isolated one to three meter intervals of anomalous gold grading 0.1 to 0.4 gpt. Mineralization is open to the east of hole 16PSDH001, and over the next few weeks, Novo plans to undertake field exploration looking for extensions of this newly discovered zone.

Between Blue Spec and Gold Spec

Five holes drilled on 50-meter spacing, each south-oriented and drilled at -60 degrees, tested the Blue Spec shear zone in areas between the Gold Spec and Blue Spec high-grade shoots.

Although these five holes did not encounter economic gold mineralization, elevated gold and antimony intercepts indicate ore bearing fluids exploited the shear zone in this area. The long intervals of elevated antimony in holes 16BSDH014 and 16BSDH018 are similar to what is observed around the periphery of the high-grade Blue Spec deposit and may indicate the presence of a nearby mineralized zone. Blue Spec is 450 meters east of 16BSDH014. Novo thinks potential remains to discover blind shoots in this area.

Novo will continue to announce results from the Blue Spec drill campaign as they become available over the next few weeks.

Quinton Hennigh (Ph.D., P.Geo.) is the Qualified Person pursuant to National Instrument 43-101 responsible for, and having reviewed and approved, the technical information contained in this news release. Dr. Hennigh is President, CEO and a Director of Novo Resources Corp.

Some statements in this news release contain forward-looking information (within the meaning of Canadian securities legislation) including, without limitation, statements as to the expected receipt of results from various exploration and testing activities. Forward-looking statements address future events and conditions and, as such, involve known and unknown risks, uncertainties and other factors which may cause the actual results, performance or achievements to be materially different from any future results, performance or achievements expressed or implied by the statements. Such factors include, without limitation, customary risks of the mineral resource exploration industry as well as Novo having sufficient cash to fund the planned drilling and other exploration activities. 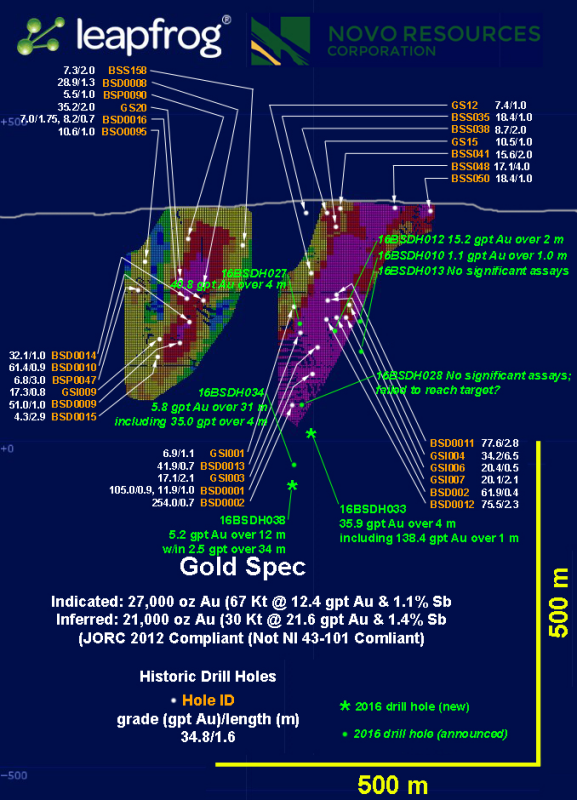