In the Company's news release issued February 1, 2017, Novo discussed favorable cyanidation results from six tests performed on a sample of tailings from its recently processed bulk sample. Bulk sample material was treated through the Company's IGR3000 gravity test plant late last year. Cyanidation was found to be exceptionally effective at recovering gold from this sample. Recoveries exceeded 97% within just 12 hours of leaching, even at a coarse grind size of 212 microns (0.212 mm). Lime consumption was low, ranging from 0.87 to 1.51 kg/tonne, and NaCN consumption was very low, ranging from 0.15 to 0.40 kg/tonne.

In late 2014, Novo set about drilling and trench sampling mineralized conglomerates at Beatons Creek with the intention of establishing a robust near-surface resource. In the Company's news release issued September 16, 2015, Novo announced a global near-surface resource of 299,000 oz Au at 2.7 gpt in the measured and indicated categories and 259,000 oz Au at 2.7 gpt in the inferred category. The resource estimate for Novo's Beatons Creek Gold Project disclosed in its September 16, 2015 news release was supported by a technical report entitled NI 43-101 Technical Resource Report, Beatons Creek Gold Project, Pilbara Region, Australia prepared by Arnand van Heerden (PGeo, SACNASP, MAusIMM) of Tetra Tech (the "Technical Report"). The Technical Report was filed under Novo's profile on SEDAR (www.sedar.com) on October 13, 2015 and is also available on Novo's website (www.novoresources.com).

Since late 2015, Novo has focused on moving Beatons Creek through economic study with a vision of establishing a case for a modest sized, oxide-only mine using gravity-only treatment. Novo's bulk sampling exercise conducted late last year was a critical step in evaluating many aspects of mining and processing needed to complete this study, and work on this study is effectively complete.

Novo decided to pursue a modest sized, oxide-only, mine scenario using gravity-only recovery at a time when market sentiment toward gold mining was sharply negative and capital for gold mining projects was scarce and came with unfavorable terms. With no certainty that market conditions would improve, Novo considered that such a mine would be the cheapest, most effective path to move Beatons Creek toward production.

Several factors have changed over the past 15 months:

Since receiving cyanidation test results, Novo has examined, at a high level, how the introduction of conventional cyanide treatment might impact economics at Beatons Creek. A processing rate of around 2,000 tonnes per day utilizing a gravity + carbon-in-leach ("CIL") mill was considered.

Initial feedback suggests the amount of capital needed to bring CIL into the project's processing design is potentially only modestly higher than that for the current gravity-only design. Although processing costs are expected to be somewhat higher using gravity + CIL mill, added gold recovery easily offsets additional operating costs. Novo has modeled recoveries in a gravity-only scenario at 80% whereas cyanidation test data indicate potential recoveries of +97% in a gravity + CIL mill.

Novo now considers the case for gravity + CIL milling to be compelling. Such a traditional milling scenario could potentially enhance both the cash flow and net present value of the project. Gravity + CIL mills operate over much of Australia where the technology is considered well-proven. Novo recognizes that potential financing for a more traditional milling scenario could be made simpler.

With a more robust milling scenario in mind and a potentially longer mine-life, Novo has recently decided to undertake work to upgrade and expand existing mineral resources at Beatons Creek. In areas of inferred oxide resources, trench (costean) sampling is being undertaken with the intention of upgrading these to indicated resources. Novo has also identified several new areas where mineralized conglomerates are present that have not yet been included in the resource, but can potentially be added through costean sampling.

Upon completion of costean sampling in approximately one month, Novo plans to undertake a modest reverse circulation drill program to help upgrade and expand both oxide and fresh resources. Novo considers the potential to grow its resource base very good given that most conglomerate horizons remain open into the Nullagine sub-basin.

Work to upgrade and expand gold resources is expected to take approximately 3-4 months. While resource work progresses, Novo is shifting focus of economic study to a gravity + CIL milling scheme with an expected completion within 1-2 months after resources are restated for Beatons Creek. Permitting works already underway will be re-geared in this new direction.

Novo completed seven reverse circulation and core holes in areas east of the Blue Spec high-grade deposit. All holes were drilled from north to south at inclinations of 55-70 degrees, and were designed to test for extensions of mineralization (Figure 1). Significant results are presented in the table below.

Holes 16BSDH016 and 16BSDH035 tested areas immediately above the projected high-grade core of Blue Spec and between the Blue Spec zone and the Red Spec zone further east. Both holes encountered significant gold mineralization including 5.01 gpt Au over 3 m and 3.97 gpt over 1.2 m, respectively, suggesting there is a probability that Blue Spec and Red Spec may link together. While these grades are lower than those encountered in Blue Spec's high-grade core, Novo believes these results indicate the high-grade core may be present immediately below this area.

Reviewing this drill data, Novo considers the best potential to expand mineralization at Blue Spec lies in the down-plunge direction to the east and under the Red Spec area. Further drilling is needed to verify this possibility. True widths of mineralized intercepts are estimated to be approximately 30-40% of reported down-hole intervals.

Eight shallow reverse circulation holes were completed at the Magic Mountain drill target about 35 km east of Blue Spec. All holes were drilled in a southwestward direction at inclinations of 50-65 degrees. The Magic Mountain target is a 100 m long, near-vertical zone where surface rock chip sampling returned values up to 17.4 gpt Au.

Quinton Hennigh (Ph.D., P.Geo.) is the Qualified Person pursuant to National Instrument 43-101 responsible for, and having reviewed and approved, the technical information contained in this news release. Dr. Hennigh is President, CEO and a Director of Novo Resources Corp.

Some statements in this news release contain forward-looking information (within the meaning of Canadian securities legislation) including, without limitation, statements as to the expected receipt of results from various exploration and testing activities. Forward-looking statements address future events and conditions and, as such, involve known and unknown risks, uncertainties and other factors which may cause the actual results, performance or achievements to be materially different from any future results, performance or achievements expressed or implied by the statements. Such factors include, without limitation, customary risks of the mineral resource exploration industry as well as Novo having sufficient cash to fund the planned drilling and other exploration activities. 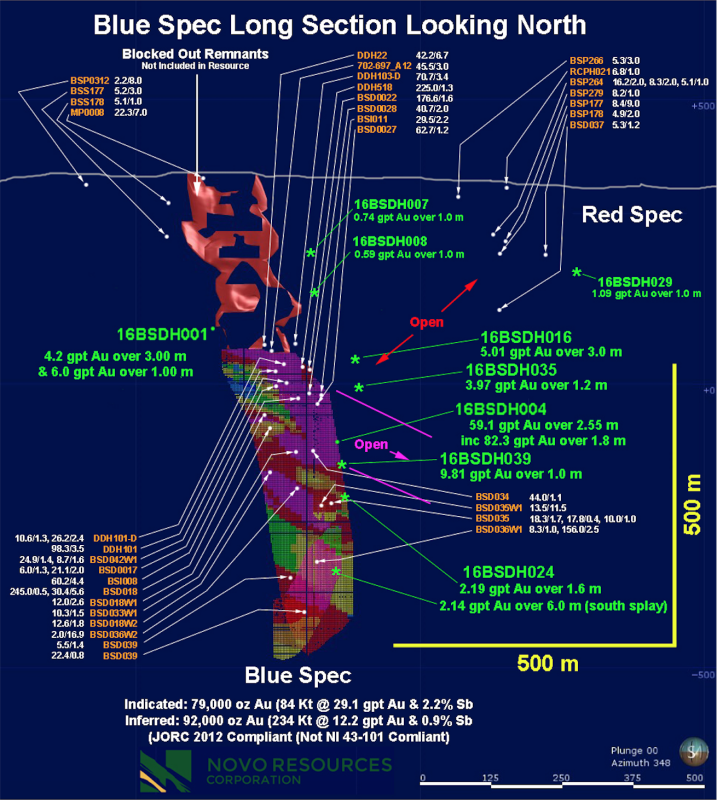 (Figure 1: Long section through the Blue Spec deposit showing historic drill intercepts and the locations of Novo's recent drill intercepts. The historical estimates listed in Figure 1, above, and disclosed in Northwest Resources Limited's ("Northwest") news release of September 30, 2013 and in the mineral resource statement issued by Northwest on the same date (the "Northwest Disclosure Documents"), are stated to have been reported in accordance with the 2012 edition of the Australasian Code for Reporting of Exploration Results, Mineral Resources and Ore Reserves (2012 JORC Code), which are consistent with sections 1.2 and 1.3 of NI 43-101. For the key assumptions, parameters, and methods used to prepare these estimates, please refer to the Northwest Disclosure Documents which are available on Northwest's website (www.nw-resources.com.au). These are the most updated estimates and data available regarding the Blue Spec and Gold Spec deposits (except for the data contained in this news release) and, as such, no work needs to be done at this point in time to upgrade or verify the estimates. Novo is unaware of the existence of any technical report prepared in connection with the technical information contained in the Northwest Disclosure Documents. A qualified person has not done sufficient work to classify the historical estimate as current mineral resources or mineral reserves. Novo is not treating the historical estimate as current mineral resources or mineral reserves.)