“GPR coupled with exploration trenching and metal detecting is proving to be the most effective means of exploration of the gold-bearing terrace gravels at Egina,” commented Dr. Quinton Hennigh, President and Chairman of Novo. “We are very encouraged by results from our first trench. Although nuggets occur along the length of the trench, we can now clearly see a connection between the slight topographic depression, or swale, and high concentration of nuggets. Finding such large concentration of large gold nuggets is a testament to the uniqueness of the Egina gold system. We are hopeful the system is opening up as we step away from the hills at Egina and onto the greater terrace to the east, and we are looking forward to getting further heritage clearance to explore more of this unusual deposit.”

Novo staff detected and collected nuggets from the exploration trench. Nuggets were subsequently measured, weighed, and logged, without limitation, prior to being securely stored. All relevant data to date has been verified by Novo staff.

Dr. Quinton Hennigh, P. Geo., the Company’s, President, Chairman, and a Director, and a qualified person as defined by National Instrument 43-101, has approved the technical contents of this news release.

Novo’s focus is to explore and develop gold projects in the Pilbara region of Western Australia, and Novo has built up a significant land package covering approximately 13,000 sq km with varying ownership interests. For more information, please contact Leo Karabelas at (416) 543-3120 or e-mail leo@novoresources.com

Forward-looking information
Some statements in this news release contain forward-looking information (within the meaning of Canadian securities legislation) including, without limitation, statements as to planned exploration activities and the expected timing of the receipt of results and heritage clearances. These statements address future events and conditions and, as such, involve known and unknown risks, uncertainties and other factors which may cause the actual results, performance or achievements to be materially different from any future results, performance or achievements expressed or implied by the statements. Such factors include, without limitation, customary risks of the mineral resource industry as well as the performance of services by third parties.

(Figure 1: Map showing the exploration trench discussed in this news release (left). This trench lies on the margin of an area disturbed by the previous owner of the Egina mining lease (upper left). Nuggets are represented by colored dots scattered along the length of the trench. The highest concentration of nuggets occurs in an area near the north end and is highlighted in the inset map on the right. Novo has collected one bulk sample from this location (blue) and plans to collect additional samples over the next few days.)

(Figure 2: Some of the larger gold nuggets recovered from Novo’s first exploration trench at Egina. Most nuggets are rounded and flattened. Starting in the upper left and working clockwise, nuggets weigh 83.18, 78.14, 14.36, 14.15, 4.83, 20.54, 6.09 and 10.78 grams. The photograph is of concentrated gold nuggets and is not necessarily indicative or representative of mineralization hosted on the Egina gold project.) 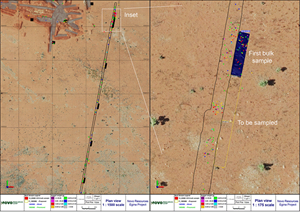 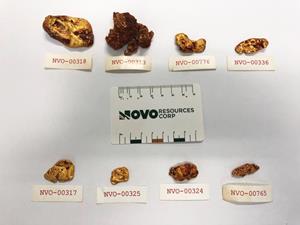